Sharif Ali watched his own world collapse through idle hands, drifting dreams, and a strange aura of indifference. Colleagues scratched their heads as he left his job, his band, his mind, and headed to Palestine to teach kids how to skateboard. Upon return, he found himself sleeping on friends couches with no plan or home to rest his head. Sharif sent a mountain of odd ball pop songs over to Halfshell HQ and took off again to hide out in Mexico. 5 tracks were selected for a first release.

On Sharif Ali’s debut ‘Higher Lows’, he departs from his comfortable rock n roll dwellings as Killer Ghost songwriter and Great Spiders guitarist to show a bit of tenderness, and wall melting honesty. The synth and electric piano heavy tracks contain heavenly glimmers of Brian Eno type wizardry, surging circuitry of Gary Numan-esque lines, and a whole lot of karaoke style crooning from a post-detention Breakfast Club drifter with nothing to lose.

“Sharif’s own debut reveals an endearing layer of vulnerability coupled with organic, electric elements that maximizes the minimalist components to a level of homespun grandeur.” – Week in Pop 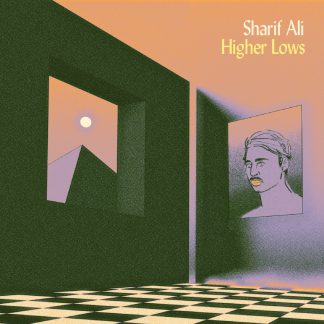