Hit Reset is The Julie Ruin’s first full-length since 2013’s Run Fast and the release of the biographical documentary The Punk Singer (which charts Kathleen Hanna’s career from the founding of Bikini Kill through to this latest iteration of The Julie Ruin).

Mixed by Eli Crews (with whom the band worked on Run Fast), Hit Reset expands on the band’s established sound: dancier in spots and moodier in others, with girl group backing vocals and even a touching ballad closer. Hit Reset is the sound of a band who have found their sweet spot. Hanna’s vocals are empowered and her lyrics are as pointed and poignant as ever. From the chilling first lines of “Hit Reset” (“Deer hooves hanging on the wall, shell casings in the closet hall”) to the touching lines of “Calverton” (“Without you I might be numb, hiding in my apartment from everyone / Without you I’d take the fifth, or be on my death bed still full of wishes”), Hanna takes a leap into the personal not seen completely on the first album or possibly even in the rest of her work. 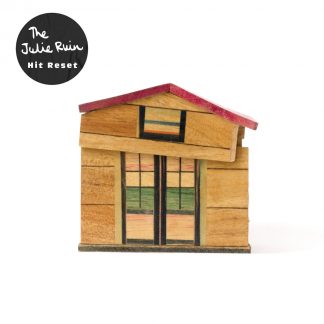