Presidential Bootleg pulls together all 20 of Watergate Sandals’ recorded songs, from the 8 featured on Pick Apart the Jewels and Gems, the 5 featured on their final digital-only EP, 4 newly mastered former demo recordings, and 3 never before heard recordings to form the ultimate document of the Santa Cruz band’s history. Watergate Sandals notably went through a few distinct shifts during their run, starting as a noisy punk blues band, then moving towards more power pop oriented garage rock and then finally landing on psych rock influenced by the Paisley Underground. As such, none of their previous works quite captured a true picture of the band in isolation. Presidential Bootleg is arranged not as a chronological compilation, but its own album released (and not released) in bits and pieces over the years, flashing back and forth between the eras in a way that feels as though it were always meant to be and lending immense range and dynamism to the 70 minute runtime. Shockingly seamless transitions from the destructive force of the newly mastered “Landlord” into the soft, floating “Ways Away” paint a perfect picture of the band’s uncommon deftness and versatility.

Thanks to the efforts of Jesse Nestler (Watergate Sandals bassist) and Kevin Percy Linn (owner of Paisley Shirt Records and genius behind Sad Eyed Beatniks), we’ve been able to put together an incredible package honoring the band in celebration of the 4th anniversary of their previously only physical release, Pick Apart the Jewels and Gems. Featuring a stunning double-sided 7-panel j-card collage including archival photography, old gig flyers, and satirical American and presidential iconography, Presidential Bootleg is not only musically comprehensive, but visually as well. 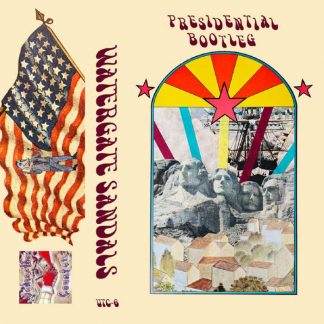