The Hopping Penguins were formed in Halifax, Canada in 1982. However the didn’t really get going till they relocated to Toronto.
The band is fronted by Peter Baylis, with Andrew Lordly on sax, Gary Edwards on drums, Basil Chaisson on guitar, Pete King on bass, Brad Conrad on guitar and guest appearances by Bruce Vickery, lead vocalists and percussionist. Members of the band hail from different parts of Canada.

With a repertoire of Marley-style reggae, soulful ska, straight ahead funk, rock and roll and rhythm and blues they bring an eclectic and diverse pastiche to every show. After a decade of playing ska, reggae and rock tunes on the Toronto club scene, the 7-piece band finally took the dive to try and capture their frenetic energy on tape. Cover versions of Billy Paul’s “Me and Mrs. Jones” and Jimi Hendrix’ “Hey Joe” highlighted their 1992 debut ‘Trombone Chromosome’. 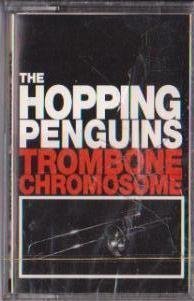 You're viewing: The Hopping Penguins – Trombone Chromosome $3.49
Add to cart